Panchang which is also known as Panchangam is used to denote five elements of Vedic Astrology, namely Tithi, Nakshatra, Yoga, Karana and Var i.e. weekday. These five elements when combined for a day are known as Panchang. These five elements change every day with the movement of the Moon and the Sun. Hence, followers of Hinduism refer Panchangam on day to day basis. Panchang is also known as Hindu Calendar.
Download APK
4.7/5 Votes: 33,033
Report
Developer
Drik Panchang Private LimitedUpdated
April 10, 2020Size
Varies with deviceRequirements
Varies with deviceGet it on

Hindu Calendar is a android app made by Drik Panchang Private Limited.

Drik Panchang is one of the most reputed Panchangam available on Internet. It has been made available for Android devices with similar features and precision as that of http://www.DrikPanchang.com. This native Panchang, which doesn’t need Internet connectivity to use, comes with following features

Festivals – Drik Panchang is the most comprehensive source which lists most Hindu and Indian festivals, Government Holidays, Jayanti, fasting days including Ekadashi, Sankashti, Pradosham, Purnima, Sankranti, Durgashtami and Shivaratri days for each month. Drik Panchang lists all Chandra Grahan and Surya Grahan dates in the year.

Kundali Support – Drik Panchang comes with Kundali support and it can generate Lagna, Navamsha, Surya, Chandra and Shukra Kundali for any date, time and location. For Lagna Kundali it shows detailed planetary position for Sun, Moon, Mars, Mercury, Jupiter, Venus, Saturn, Rahu, Ketu, True Rahu, True Ketu, Uranus, Neptune and Pluto.
The Kundali can be drawn either in North Indian or South Indian chart format. Kundali can be Saved, Edited, Deleted or Opened with the help of Kundali editor. Each Kundali is tagged with running Dasha and Antardasha. Kundali comes with an option to explore detailed Dasha and Antardasha for next 120 years.

Vedic Timer – Vedic time which is also known as Ishtakal is provided to track time as per Vedic Era of Hinduism. In Vedic time, each day (from sunrise to sunrise) is divided into Ghati, Pala and Vipala similar to Hour, Mins and Secs. In Vedic time keeping, 60 Ghati makes a day, 60 Pala makes a Ghati and 60 Vipala makes a Pala. At Sunrise timers shows 00:00:00 and at Sunset it shows 30:00:00.
Horoscope Match – App can be used to match two horoscopes based on Ashta Kuta. Each matched horoscope result is saved for future reference.

Add Tithi – User defined Tithi can be added to Panchang with recursive reminder as per Hindu date or Gregorian date.

Location – Panchang can be generated for any location and city across the globe to get correct date for Upavasa and festivals. App comes with in-built DST support and there is no need to adjust timings for DST.

Theme – By default classic theme is set which is based on traditional Indian colors. However, it can be changed to modern looking themes which come in red, green and blue colors.

Dashboard Cards can be rearranged 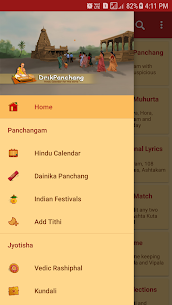 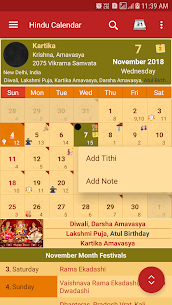 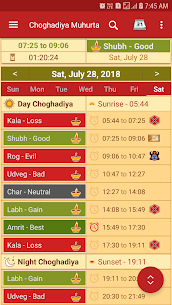 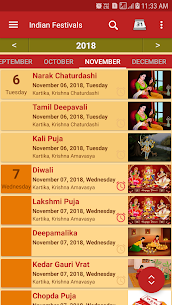 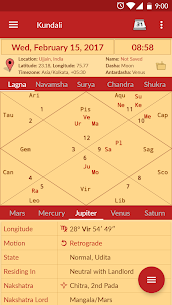 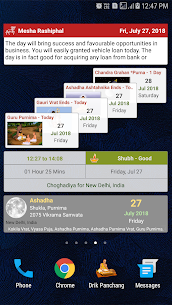 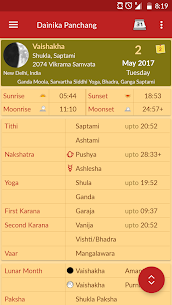 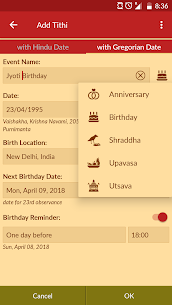 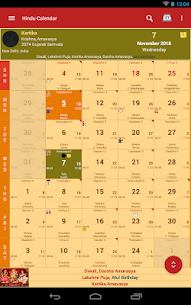 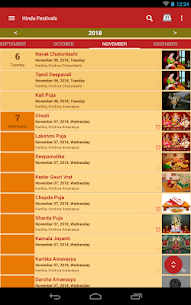